Well once again, a beautiful spring Saturday hit, and once again at the Mesa Amphitheater, the Humdinger was in full swing!  As I tried to express in my first article; this event is 100% fantastic!  It is highlighting local talent, on a weekend afternoon, for an incredible price, and kids are allowed and, in the case of 12 and under, free!  Folks – SHARE SHARE SHARE, not only this article, but the news of the Humdinger Festivals.  We simply have got to get the word out.  I am convinced, folks just do not know what a winner of an event is happening over at the Mesa Amphitheater!  Folks – you gotta let the peeps know!

NOTE: Footage for the complete Humdinger 2 LIVE Stream is available here.  Sneaky Big is currently cutting the footage into Sneaky Sessions, for each band, and those videos will also upload here, in this article, as they become available.  Be patient Bands… EVERYONE is included…. and will upload ASAP!!

After the first Humdinger Festival at Mesa Amphitheater I had one question.  Who were these Sneaky Big guys?  Although the live stream video had complications because of copyright of music playing in-between bands, Sneaky Sessions cut the video into band sets, and the quality of each was festival level fantastic! 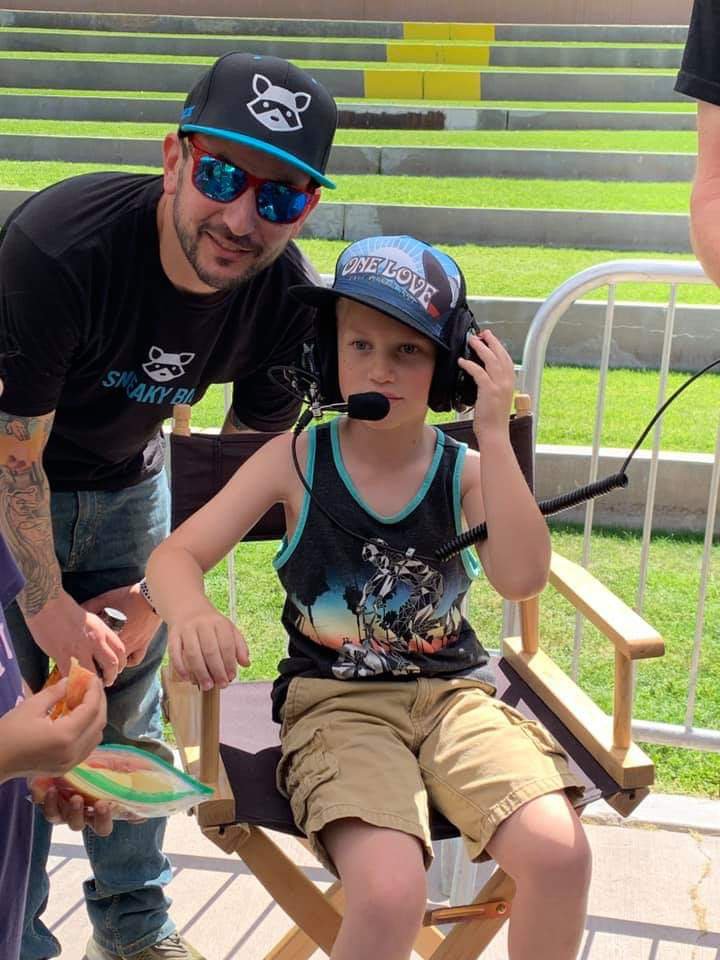 So when I got a chance to rumble up to North Scottsdale and meet Brett Coleman of Sneaky Big at the new State 48 Lager House, one of the first things I wanted to know is how this was being funded.  I assumed that the City of Mesa was behind a lot of it, trying to make renewed efforts to push their downtown scene.  I assumed incorrectly, and what I learned was that although Sneaky Big, by definition is not an “Indie” company, it has an independent soul… and Sneaky Sessions, local Arizona music family, has a lot to offer and a lot of heart, as my visit and interview with Brett will show.  Hit the guy up!

Ryan B. Clark:  Who are/ What is Sneaky Big Studios?

Brett Coleman:  Sneaky Big, which started in August of 2016, is housed in and part of the Yam (You’re a Mess) Family.  The company is owned by Bob Parsons, the former owner of Go Daddy!  (Oh! That Bob Parsons!)   What does the name mean? A Sneaky Long is a golf term, and thus, for us, Sneaky Big represents something small, that kinda comes out of nowhere, but has a large impact.  Parsons loves golf, as evidence of his latest innovations with PXG, Parsons Extreme Golf.

Ryan:  Commercials, as I was going through your website, was the bulk of Sneaky Big Studios market share it seems.  That is really not the case any longer, is that correct?

Brett:  It most definitely is the case under our Studio vertical but we are expanding our range of services.  So, correct, but we are transitioning, and now within Sneaky Big we have Four Verticals: Productions, Live, Animations, and Studios.  For example right now, one of our Live projects is that we do all of the announcing, game markers, and studio production for the new Alliance of American Football league, and those streamed games are coming though Sneaky Big.

Four games each weekend are being broadcast to major television outlets and online platforms from SNEAKY BIG.

Ryan:  So, everything we would normally think of seeing on say ESPN, you guys are doing here for the new AAF?

Brett:  Yes, in a sense.  For the AAF we built a virtual set, we house the production and send it out to the world REMI remote production is an amazing way for talent to travel less and networks to reduce overhead from travel expenses.

Ryan:  Now, most of this is way bigger than most of these local independent bands playing the Humdinger Festivals at Mesa Amphitheater can, or really would, even think about utilizing.

Brett:  But the Humdinger Live Stream by Sneaky Big Sessions is another example of a project that would be on that Live Vertical.  When Danny Zelisko first approached us about the Humdinger it was about capturing a bit of his story and learning about this new opportunity he was working on for local artists.  I engaged him in the discussion of streaming the concert live.  The Indie Music scene is HUGE for this, because as soon as a band gets beyond a certain bubble, or level, their is so much red tape in place that building up streaming content for Sneaky Sessions is hard to do OUTSIDE of Indie music.

Brett:  Basically, Phoenix has music, and it needs music, and we can do more to grow that demand and really felt it could find a place here in the Valley.  So about a year ago, we did our very first Sneaky Session with Roger Clyne & the Peacemakers in the studio.  Yeah, he came in with about 150 people, we set the studio all up hay bails and Mexican blankets.  Roger brought in his old landcruiser and some memorabilia and embellishments for the stage area.  And they did I think about seven songs.

Brett:  Exactly.  At this point it is about building content, which is another reason why coming in for some studio time, perhaps using some of it for a Sneaky Session is not only good for Sneaky Big as we try to grow this branch of our Vertical plan, but it is also a win for local independent musicians who are looking to expand their reach, or their technological constraints.

There you have it folks… Sneaky Sessions is in DEMAND for content… you have the SUPPLY.  It is a buyers market…. if this is something that may help your band, reach out to Brett Coleman!  Maybe a Sneaky Session is exactly what you need to score your Sneaky Big!

Ryan:  Back to the Sneaky Big verticals, on the Studio tree it is possible to record entire albums at Sneaky Big.  But, you are not STEM Recording, or Flying Blanket in Mesa.  If I am an indie band, what about this service do I need to know?

Brett:  I think one of the biggest misconceptions out there, in terms of the local music industry, is that perhaps we {Sneaky Big} are not approachable enough.  I think there is probably an instant misconception that our services will be too expensive.  But, again, I think this is the largest misconception because I think that one of the most affordable services we provide at Sneaky Big is the recording of music, or voice overs, or podcasts.  Our price points break at the 8 hour day, so for $650 ($100/hr) you get a full 8 hour day with the facilities and with an engineer.  That is a competitive rate, especially when the technology and equipment within that facility is figured into that equation.

Ryan:  In terms of music video production, what are some of the immediate gains for a band that may be looking to shoot a video?

NOTE:  If you were unaware, Fairy Bones recorded their video for Incapable at SNEAKY BIG !  This is what Chelsey Louise had to say about the experience:

“Sneaky Big is a seriously impressive studio in Scottsdale that I DIDN’T EVEN KNOW ABOUT! I was searching for a space to shoot a music video and luckily found it on Google. They seriously treated us like ROYALTY and the space was absolutely perfect. They do so many amazing projects there and it’s a gem that the local scene really needs to utilize! They even have a recording studio there with great rates. 10/10 recommend. – Chelsey Louise – FAIRY BONES“

Ryan:  In the end, most of my music readers in town want to know, just dealing straight out with that approach-ability issue, is Sneaky Big – or a Sneaky Session – something that is an option for them as they plan their projects?

Brett:  Everything is an option.  What I really want the Indie scene out there to know is beyond Sneaky Big: if you seek my help I am going to try to work with you to help that dream come to fruition.

Ryan:  So would it be fair to say that Sneaky Sessions are the “indie” wing of Sneaky Big?

Be sure SNEAKY SESSIONS are in your tool box!

Keep the Greasy Side Down, Amigos.

This site uses Akismet to reduce spam. Learn how your comment data is processed.